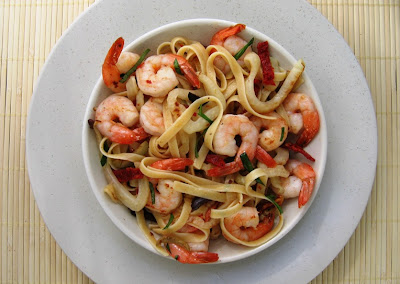 As a little girl, my favorite candies were Twizzlers ® and black jelly beans. Every Easter I would pick all the black jelly beans out of the bowl and leave the rest for everybody else. Though I rarely eat jelly beans any more, I love to cook with fennel, which has a distinctive licorice scent and flavor.

Although fennel has become fashionable over the last couple of years, this herb has actually been enjoyed in cooking since antiquity (see Lucretia Drusilla's "Whole Cooked Goat with Fennel" from her 02 February 53 BCE post). Many cultures use fennel as a culinary ingredient and as an herbal medicine, and as evidenced at my house, it’s a staple in Italian cooking. 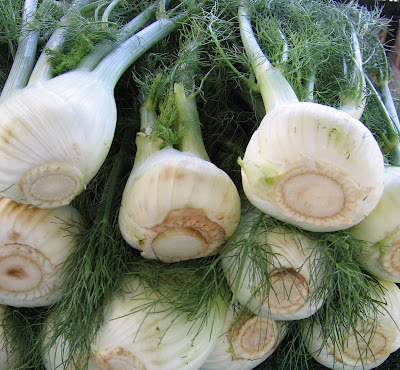 It is a remarkably versatile herb and pairs beautifully with fruits such as oranges and apples as well as classic Mediterranean ingredients such as olives and eggplant. When eaten raw, its crunchy celery-like texture and sweet licorice flavor gives depth to salads. When sautéed or roasted, it takes on a savory quality. In fact, all parts of the fennel, from the bulb to the feathery fronds, are edible.

And since it’s St. Valentine’s Day this week, I thought you'd like to know that ancient Romans considered fennel an aphrodisiac and likely would have used it instead of chocolate for a romantic evening. As so many culinary trends are cycical, I'm predicting that fennel will become the new chocolate for Valentine's Day.

I can see it now: Food Network's Fennel February, heart-shaped fennel treats on the cover of Gourmet, contestants choosing fennel for the Passionate Dish Elimination Challenge on Bravo's Top Chef....

By the way, I have submitted this post for Weekend Herb Blogging which is being hosted by Kalyn of Kalyn's Kitchen this week.

Cook pasta in salted water according to directions.

In a large skillet over medium heat, add 2 Tbsp olive oil. Add fennel, and sauté for 3-4 minutes until it begins to brown; add garlic, and sauté 1 more minute. While the fennel is still slightly firm, remove from heat, and place in a bowl. Add the olives, sun-dried tomatoes, basil, parsley, crushed red pepper, and salt.

In the same skillet over medium-high heat, add another 2 Tbsp of olive oil. Add the shrimp, and sauté for 5-7 minutes, turning to ensure that they brown nicely on both sides.

Add the cooked pasta and the fennel mixture into the skillet with the shrimp; toss well. Plate the pasta; sprinkle with more fresh basil and parsley. Finish it off with a drizzle of good extra virgin olive oil.

Save This Page on del.icio.us

Posted by Susan from Food Blogga at 10:35 AM

fennel, mon amour! didn't know it was an aphrodisiac, but i sure love it! in salads as well as cooked - just had some the other day, cooked in soup, then baked in the oven with a generous sprinkle of breadcrumbs and parmesan... divine! it's those simple things that i really enjoy!

And what wasn't considered an aphrodisiac back in Roman times??? Seriously, this recipe looks fabulous, whether for Valentine's Day or not. I love the combination of fennel and shrimp.

I think shrimps are very Valentine-y. Last year I cooked a dish of shrimp with red and white rice. I tried to hook up two shrimps in the shape of a heart, but it was a bit of a design failure.
On the other hand: a fresh bulb of fennel in the crisper drawer! Can't wait.

that is so pretty! i didn't even know of the aphrodisaic properties but i did buy a packet of fennel seeds to tuck in my husband's valentine this year.

An aphrodisiac, and probably far healthier than chocolate! Actually, your pasta dish and some champagne is my idea of true love!

awww..no oysters ? hehe :) Oh, I once bought fennel seeds instead of cumin seeds, I saw these fennel at the Whole Foods Market, but didn't know what to do with it, now I know, thx for the recipe, Susan, cheers & have a great Valentine's Day !:)

It was food writer Nadine Abensur who made me fall in love with fennel - she is French-Moroccan-Jewish and cooks vegetarian food like no one else. In her latest book she has a recipe for fennel, braised until meltingly tender in pernod and stock, with slices of garlic, slivers of whole orange and garnised with glossy black olives. So good! Fennel for Valentine's Day - I'm with you Susan!

yay, someone else that loves the licorice flavor! no one in my family does...i get the black jellybeans all to myself, 'cause they pick them out! this dish sounds amazing. and thanks for checking out my blog!

Johnanna-
Like you, I love fennel in all its forms. And breadcrumbs and parmesan enhance virtually anything!

Cookiecrumb-
As usual, you just made me laugh.

Rachel-
Thanks! You could try shaping the shrimp into a heart a la Cookiecrumb.:)

T.W.-
Apparently, there is more to life than chocolate. Though there are days I might disagree with that sentiment.

Melting Wok-
I did the same thing once with whole coriander and yellow mustard seeds--let's say that my honey mustard vinaigrette tasted a bit funky that night.;)

Lucy-
Thanks for the tip-I will definitely look her up. Based on her heritage, I know I would love her culinary taste!

Cinderelly-
Come to think of it, my brothers were probably glad I took all the jelly beans out so they wouldn't have to. And you're so welcome! Thanks for the compliment!

can't i have my fennel and chocolate on Valentine's?! :) beautiful photo. Sounds very flavorful. I LOVE FENNEL. Sadly, my boyfriend can't stand it - doesn't sit well in his tummy he proclaims. Too bad for him, I still sneak it into the house rather regularly. Thanks for sharing. hope you had a lovely weekend.

Susan,
Love fennel and love the combo with shrimp. Didn't know about it's aphrodesiac properties, but as Lydia said, what WASN'T considered an aphrodesiac back in Roman times? In Chinese medicine it can be used for abdominal pain and indigestion. Maybe that explains why the Romans found it to be an aphrodesiac? ;-)

Toni-
Actually my grandmother would always recommend a shot of Sambuca (which has anise) for an upset stomach.

That looks so good! Your post might get me over my fear of fennel. I HATE black licorice so I always have avoided recipes with fennel. I have yet to cook with it. But 2007 is a year of culinary firsts for me. And something with SHRIMP and PASTA . . . yum!

Lovely! Beautiful photos! I tried cooking fennel for the first time last month, and blogged an Italian recipe for it (Jan. 29th post). Great to see it on WHB!

I absolutely love fennels- cooked or raw. This year, I've been eating them especially often, mostly raw and dipped in olive oil and salt, or sauteed with red bellpeppers. I loved this post, naturally!

By the way, I just wanted to let you know I linked to your blog from mine- hope that's ok!

I have just gotten into using fennel having had a distinct aversion to it for many years - I particularly like it braised. This dish looks like a perfect valentines dish - pasta to share, prawns, the delicate fennel! Delicious!

I love fennel - can't get enough of it. =) This shrimp & fennel dish looks amazingly good - I will try this soon! :D

like Johanna I lOVE FENNEL IN ALL FORMS AND DISHES Thanks for the lovely story. :))

Susan, I haven't ever cooked fennel once. Now I'm interested!

Fennel as an aphrodisiac?
Now that's very interesting;)
It would make a great change to classic chocolate gifts:)

I still get nervous about fennel...I need to just suck it up and make it one day

Rachel-
Thanks! If you're concerned about the licorice taste, then you might try it cooked instead of raw, as the flavor is more subtle.

Anna-
Thanks so much! Glad you tried it!

Bazu-
Thank you for the link!

Freya-
It is an acquired taste. So glad you liked the recipe!

Lis-
Thanks! Hope you do!

Helene-
You're welcome; thanks for the lovely compliment.

Valentina-
See what I mean? It's catchin on already!

Jeff-
Try it with your fresh pasta!

I've never had fennel and your lovely post just made more curious about it!

I am so glad you posted something about fennel. I am beyond curious about this vegetablish herb, but I never cook with it. I just don't know the right recipes. This will be a great starting point - fennel with pasta. Thanks!

I've never used fennel in any of my cooking before but I was always very curious about it. I remember having a salad with grilled calamari before and the dressing had fennel in it. It was delicious!

I must admit, I don't like licorice--but I love fennel. You recipe looks fabulous! Very nice recipe.

Patricia-
I can't believe that you and Gattina have never had fennel. Why?Because your cooking is so amazing!

Rachael-
I'm so glad! Pairing just about anything with pasta makes it worth a try!

Veronica-
If you liked it raw, you'll love it cooked, I'm sure.

Sher-
Oh, thank you! You must like red licorice? :)

I love fennel. I always remember by grandmother having at her house and eating it often. Now, I learn it is an aphrodisiac? Oh - TMI! ...grandmas are not supposed to know about aphrodisiacs! Ha!

That's me too, I never like black licorice--or rather the only true licorice--until I grew into it as an adult. I do love anise as well. I have great recipe for Mediterranean dinner rolls stuffed with feta and mozzarella that have anise in the dough. Drool.

I'm a big fan of pasta, I'll have to try this one.

You can come to our house anytime for the black jelly beans. They are always the ones left at the end of a bag.

I love licorice though. Has me wondering.... I wonder if this would be something I'd like. I could definitely use the aphrodisiac! :)

I can't forget the chocolate but this looks delicious. How about pan-seared shrimp and fennel followed by chocolate? It would work for me.

Funny thing, I don't particularly care for licorice but I like fennel very much. Go figure.

Chris-
Hmmm, maybe grandma was wiser than you thought.;)

Michelle-
Ditto on the drool.

Kristen-
Yeh! All for me?
Give it a try! You might be surprised.;)

Julie-
Fennel then shrimp. It's a deal.

I don't know about replacing chocolate, for the chocoholics among us, but you have an interesting concept here. I had no idea fennel was considered an aphrodisiac. I love eggplant, so I'll have to find a recipe or two that combine eggplant with fennel.

I really didn't discover fennel until I moved to France. That was in 1990, though, so it probably wasn't that available in the USA. It is an absolute favorite of ours in any way, shape or form. Salmon with fennel, fennel gratin, fennel soup...yum.

I absolutely love fennel with fishes and seafood, it adds such a nice refreshing edge! This is a wonderful dish, I am definately going to try this out at home!

This looks great, Susan!! I can't wait to try it.

Fennel is a fabulous aphrodisiac, and one of my favorites. So is shrimp. In fact, every ingredient in your recipe except the pasta and parsley are aphrodisiacs, as well.

I have an alphabetical list of edible aphrodisiacs on my blog, and have recently posted a recipe for an aphrodisiac infused Valentines Day picnic at home here, should you be interested.