You just never know what you're going to find at the farmers' market. This past Sunday as I was walking toward a table heavy with eggplant I noticed something strange. The closer I got to it, the bigger it got. The eggplant was expanding right in front of my own eyes.

My first thought was, "Great, I mixed up my contact lenses again and have them in the wrong eyes." (Yes, I've done that before -- it distorts your vision.)

When I reached the eggplant, I bent down, staring closely at it. It stopped growing, and it was sharp and in focus. My eyes weren't deceiving me; these eggplants were far from normal. Sure, they still had their smooth, shiny, purple skin. But they were huge. Like beached whales, they were unmovable.

The farmer noticed me ogling and scurried over. "Is something wrong?" he asked.

He exhaled a sigh of relief and smiled warmly.

I picked one up. It was heavy, in the 1 to 2-pounds. I held it up, turning it around, admiring its muscular size and heft.

"So, what made them grow so large?" I asked.

"The sun?" the farmer said, asking me more than answering me.

"No, I mean did you do anything special to make them grow so large?"

"Water them?" he said, in that questioning voice.

"Are they heirloom eggplants? Are the seeds special? Are they from Jupiter?" I asked.

I was determined to get to the bottom of these freakishly large nightshades.

He furrowed his eyebrows and rubbed his chin between his thumb and forefinger. He paused then finally said, "Nope. They're just really big. Do you want to buy one?"

In typical supersized-American fashion, I said, "No, give me two."

Whether you find a giant eggplant or not, here are seven sensational eggplant recipes for you to try: 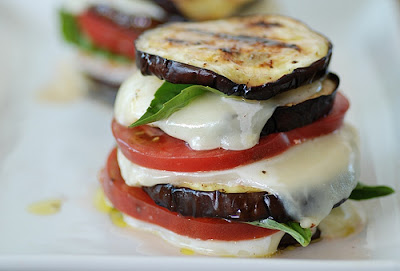 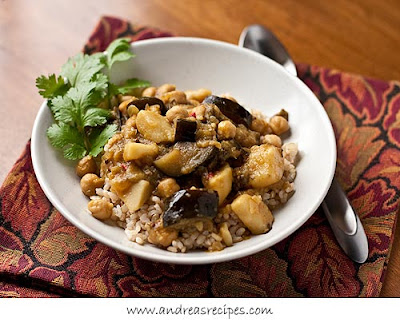 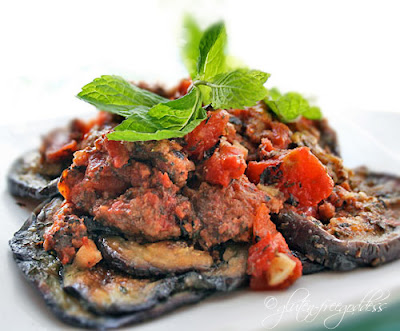 Pasta alla Norma recipe from The Italian Dish
Posted by Susan from Food Blogga at 6:26 AM

Bloomin' heck that is one huge aubergine! I love the sound of the recipes you listed too. Will have to check them out. I especially like your stack, yum!

That is huge! Love eggplants, just made some yesterday with onions and a touch of cinnamon, delish!

Almost a foot long? Holy Moly! That is one giant eggplant. I'm going to check out those recipes you listed because we live near a farm that grows eggplant and I never know what to do with them. So many great ideas!

And in true American fashion I said, No give me two." LOL -- I love eggplant and all these wonderful ideas! Trying to get the husb. to eat more...

Ha! Like beached whales, eh? That's certainly a visual. I have been overrun with eggplant this summer, but I have yet to have one stare me down!

That is a monster! I found a vendor at the market selling those behemoths for .50 each. I bought two and we had some amazing dishes with them. I finding a lot to love about these purple globes.

I'm printing off several of those recipes; eggplant is so bountiful right now. Baskets of them sell for about $2.00 at the market and it's so fun to experiment.a

Before scrolling along to read the post, I thought, "Susan grew that in a patio pot?!" I was gonna be really impressed ;)

Oh what am I saying, I'm still impressed. All I got from my garden this year were tiny aubergine that would have been hopelessly lost in a calzone. I really marvel at the way things grow out there in California.

That is one giant eggplant for a larger than life dish.

<3 you had me at eggplant...i love that you have so many recipes, i will have to try them all!

jacqueline- "Bloomin' heck!" I love that! ;) I adore those stacks too. Sooo pretty!

rita-The touch of cinnamon is a delicious idea.

anonymous-Do you know how lucky you are? :)

kate-50 cents? I would have bought 10! I'm so happy you're printing the recipes. They really are wonderful .

goody-In a pot? Ha! That's too funny. You have such a good memory, Goody. Yeah, CA is the land of plenty when it comes to produce, isn't it?

cinderelly-So nice to hear from you! I'm so glad you like them!

I'm *super* excited to try some of these fabulous eggplant recipes - it's absolutely one of my favorite vegetables!

I love that you actually measured the eggplant! My mother-in-law has an avocado tree that produces monster fruit too. They are definitely cousins at the very least!
I'm looking forward to making the little of 'tower of goodness' you pictured so well.
Thanks for sharing.

these are all great recipes for eggplant. It's such a wonderful versatile veggie

Eggplant is fantastic. Here's another fabulous way to use a fabulous foot-longer:
http://www.nytimes.com/2011/08/03/dining/turkish-style-braised-eggplant-recipe.html?ref=dining

Eggplant (or aubergine) is my favourite vegetable. And this is one good-looking aubergine! Yummy.

I have been ogling these huge eggplants for a while now, but I cannot find a kindred spirit here willing to share my love! Yes, they have never been bigger - the summer was hot and dry and they loved it! Those Napoleons look awesome - I have to make them once I am back to the U.S.