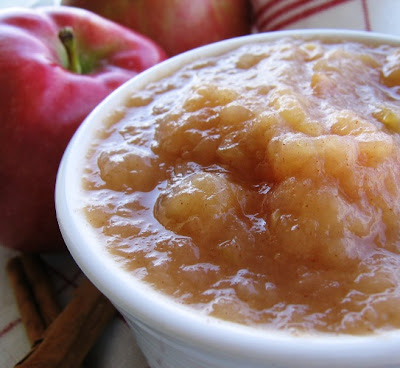 My local market recently had a sale on apples. Since it's well past apple picking season, I decided to stock up. I spent 10 minutes carefully selecting the most perfectly shaped, shiny Macs, Rome Beauties, and Pink Ladies I could find.

I gently placed my bags of apples on the conveyor belt at the checkout. As I continued to unload my remaining groceries, from the corner of my eye I saw my apples disappear from the belt: blam! onto the scale, then blam! into the grocery bag. Before I could utter a word, it was too late. My previously pristine apples were irrevocably spotted with unsightly blemishes.

Rather than trying to eat around the bruises, I did what any resourceful food blogger would do: I made apple sauce. Homemade apple sauce is infinitely better than bottled. With no additives or preservatives, it's healthier too. Plus when you make it, your entire house smells like freshly baked apple pie; that's reason enough to not buy the bottled kind.

Though I love to eat apple sauce on its own, it's surprisingly delicious with other foods. I've become excited about getting up in the morning since I began swirling apple sauce, dates, and walnuts into my oatmeal. 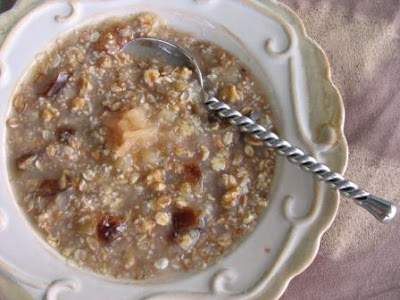 I love butternut squash simply roasted, but I really love it filled with homemade apple sauce, toasted pecans, and ground cinnamon and nutmeg. 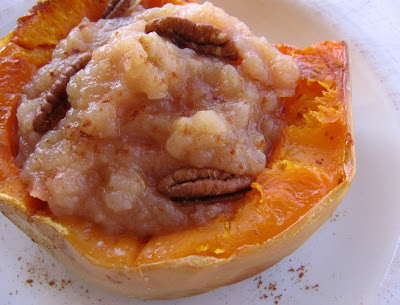 How I make homemade apple sauce: 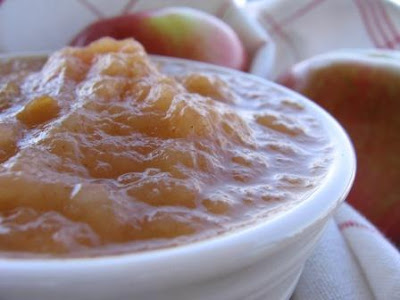 Leave a few lumps and bumps in it or puree it in a blender for a smooth finish. Make sure to let it cool first before pouring it the blender! Otherwise it will blow the cover off. Not that it has happened to me.

Let the sauce cool before serving.

You might also like my:
Torta di Mele (Apple Cake)
Warm Citrus and Banana Cups
Baked Yams with a Citrus Glaze and Toasted Pecans

More about apple sauce from Marisa of Slashfood.
Try a delicious recipe for Latkes with Apple Sauce created by the Iron Chef, Mario Batale, and posted on Serious Eats.

Save This Page on Del.icio.us
Posted by Susan from Food Blogga at 6:35 AM

Susan, one doubt...how long can we save this in the refrigerator..? dont u think it will stay good for some time when lemon juice is also added?

I made Apple butter with cinnamon last week for sandwiches, I guess it's the same. Apple sauce is kids' favorite lunch pack option. Looks delicious! Lemon juice is a good idea, prevents discoloration too!:)

Very nice, Susan. I really should try making apple sauce and I love the suggestion of using it to fill butternut squash. In the meantime, I keep making your wonderful torta di mele.

Oh wow, I never even thought to make my own apple sauce. Thanks for the inspiration, Susan!

oh yum, that looks so good i can almost smell it! we used to eat it on top of pancakes when i was a kid!

I think the most satisfying kitchen magic is in turning "iffy" food into something new and delicious. Whether it's turning bruised apples into delicious applesauce or black bananas into banana bread or slightly wilted herbs intomixed herb pesto or tired carrots into soup... it's all magic of the best kind (hey, I think I may have a new post here. I shall give you full credit if I ever write it!).

I bet your kitchen smelled wonderful!

I love homemade apple sauce. I always serve it with grilled pork chops. It seems to help my girls eat more as well!

I make a big batch of applesauce almost every week (they don't call this part of Rhode Island Apple Valley for nothing!). My grandmother always made it without any sweetener, just cinnamon and cloves, a mix of varieties of apples, with all of the skins left on to give a wonderful pink color. That's the way I make it, too.

Could this be the ultimate comfort food? I do think so!
It looks wonderful and I love your other combinations as well! I'm craving for some now! :-)

Looks wonderful. I've been meaning to do something similar: over vacation, my wife and I had this great french toast topped off with some delicious apple butter...

Shn-The longest I have kept it in the fridge is about one week. We usually eat it much sooner. I'm sure lemon juice's acidity would lengthen its shelf life.

Ann-That's so true. And I've got some very ripe bananas on my counter right now....

Lydia-And the apples you get are even tastier.

Mike-Mmmm...you're the second person to mention apple butter. I have got to try that.

My favorite childhood memory is when my mom made apple jam and I sat next to her on the kitchen platform, waiting for her to be done so I could dig right in!!:D

Susan, that looks awesome. I love applesauce--I recently had my wisdom teeth out and got hooked on it again (I hadn't been eating it actively for a long time!)

I can't remember the last time I made home made applesauce.

I guess its apple season so I'd better make a batch.

Love it on a stack of pancakes + maple syrup

I love apple anything. The idea of stirring freshly made applesauce into my oatmeal sounds delicious.
I think someone mentioned apple butter, above. Could that be your next project?

The dessert of nature itself!

This is something I love. if your apples arereally sweet, you don't need the sugar. And its great to use in baking sometimes if you want to reduce the sugar without doing away with the sweet!

Looks really good.
I make apple sauce justlike you but then i use them for lunch. I serve them with chicken breat, mash potatos andapple sauce ;-)

I love homemade apple sauce, I wrote about it in my post yesterday and about a year ago walked folks through it,
http://saucesandstuff.blogspot.com/2006/10/how-do-you-like-them-apples.html

It is a great thing to do with kids since there are so many steps they can help with. Of course the cooking part they can't but the smell in the house is always so good when it is happening!

Homemade applesauce is fabulous and brings back some treasured but sad memories. My mother in law used to make it for my mom during the last month of her life because it was one of the only things she could eat.

that butternut squash dish looks absolutely amazing. i've been trying to expand my squash recipe repetoire, so this is very helpful!

When life hands you bruised apples make...you guessed it! haha
Good save, Susan!

Haha dented apples. Great post! I love applesauce, especially on potato pancakes. Thanks for inspiring me to make my own!

Oh, I love these apple sauce ideas!! I bet it would also be lovely swirled in Greek yogurt...mmm...

Beautiful apple sauce and wonderful ideas for it but also take half of the apple sauce out and make the remaining apple butter, which I love also.

I hate when they play football with your groceries in the check out line! It is one of my boggest pet peeves. Thank goodness you're resourceful. That applesauce looks so delicious! I love the idea of filling butternut squash with it. I would never have thought of that.

I am definitely trying these recipes! I LOVEEEE APPLES!! You gave some great suggestions there in your post!

You've been tagged by Ms. Giselle :-)

Applesauce is one of my comfort foods. your post makes me want to go find whip up a batch! Looks great:)

I will have to try the cranberries or maple syrup as an option - And, now, having seen your butternut squash creation, I think I'm heading to the market this morning for squash and apples!

thanks for your comment on my blog, susan! i look forward to trying out that banana coconut bread! :) ps---homemade apple sauce is sooo delicious! brown sugar always goes well in it, also. :)

I have made apple butter in the crockpot before, but I haven't tried applesauce. Just thinking about the smell this would infuse into my house makes me want to follow your lead!

Applesouce..something we should just have in the kitchen. There is such a multitude of uses for it!
Ronell

I love the apple sauce and oatmeal combination. Just delicious! Will have to try out your recipe. It looks wonderful!

Oh my - I think we can all relate to the inconsiderate checkout person! Someday I am going to say something!

Your apple sauce looks wonderful! I like how there is very little sugar. I made it with rhubarb last winter...has a yummy twist!

YUM! (Well, except for the blam! part. That totally cracked me up, though. ; )

I love homemade applesauce! A Swiss friend of mine turned me onto it because she always made a fresh batch of applesauce when she made homemade potatoes au gratin. Apparently that's a very traditional Swiss dish. It really is a great way to use up bruised or just a windfall of apples. Thanks for the reminder!

Ok, I think I goofed up:) I meant to say that I have nothing to do with New England except Sexy Tom Brady:) and my husband would never allow me to root for him!! I guess having lived in LA, SD and now bay area, I should show more allegiace to San Diego!:D

Hello, I came online to find a healthier less sugar recipe for homemade applesauce, after my daughter's class made some today with 1 C sugar!! This looks great!

Hi Rachelle,
I'm so glad you found this then. :)