Of Yankees and Yams 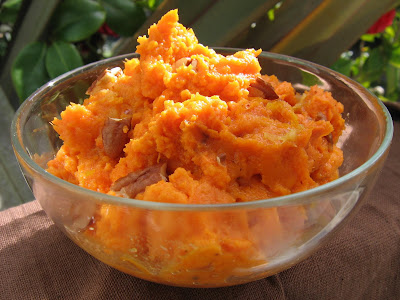 I always thought yams and sweet potatoes were different vegetables. A few years ago a farmer taught me differently. We had just moved to North Carolina from Rhode Island and went to the Raleigh Farmers' Market looking for yams. We saw a farmer with a 3-foot high pile of tubers on his table and a single cardboard sign labled "Sweet Potatoes." So I asked him, "Do you have any yams?" He answered, "They're right 'ere," picking up one of the potatoes from the table in front of us. "No, yams," I said. "Yeah, right 'ere," he repeated, handing me the sweet potato.

I looked over at Jeff thinking: Great, these Southerners don't know the difference between a sweet potato and a yam.

At the same time the farmer looked over at his wife behind the cash box thinking: Great, another Yankee who doesn't know the first thing about potatoes.

He then explained to me that a yam is really just an orange-fleshed sweet potato. Unlike their white-fleshed counterparts, however, these tubers are so sweet that even when eaten plain they taste like sugar has been added to them. In fact, that first week I used them to make a sweet potato pie (from a wonderful recipe from this same farmer). I brought him a piece the next weekend. Who would have known that the simple sweet potato (er, yam) could be the basis of a rapprochement of the North and South.

I tossed this recipe together recently with some fresh citrus and ginger to add a little sparkle. I've also used winter squash or carrots instead of yams.

1 large yam
Some cooking spray or a little olive oil for coating the yam
1 tsp butter
¼ cup orange or tangerine juice
1 tsp of good honey
About 1 tsp of grated fresh ginger
About 1 tsp of orange zest
About 1 tsp of lemon zest
A pinch of ground cinnamon
A pinch of nutmeg
Some salt and pepper, to taste
Chopped, toasted pecans for garnish

To toast the pecans, pre-heat the oven to 325 degrees. Layer the pecans on a baking sheet, and bake for 10 minutes, or until slightly toasty and aromatic.

Bump up the oven temperature to 400 degrees. Line a baking sheet with tinfoil (for easy clean-up). Slice a yam in half, lengthwise, and coat the flesh with some cooking spray or a little olive oil; place face down on baking sheet. Bake at 400 degrees for about 30 minutes, or until a fork easily pierces it. Remove from oven, and let cool.

Meanwhile, in a small pan over medium-low heat, whisk the butter, orange juice, and honey until combined. Add the remaining ingredients, and heat for a couple of minutes, until it begins to slightly thicken and bubble up.

Once the yams are cooled, scoop out the cooked flesh, and place it in a bowl. Pour the citrus glaze on top, and mix well. Add toasted pecans.

Serving Suggestion: This pairs well with pan-seared tofu or pork. 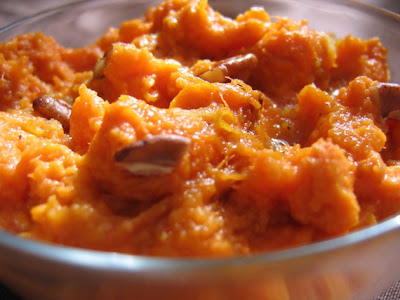 Posted by Susan from Food Blogga at 5:27 AM

Ooooh -- honey, ginger, cinnamon and sweet potato -- what could be bad???? I've been trying to eat more sweet potatoes (or are they yams?) lately, as they are so nutritionally powerful. Thanks for the recipe.

I never was a big fan of sweet potatoes, but over the years I've grown to appreciate 'em!

Oh, this looks delicious - I love sweet potatoes in their plain and unadorned state, so this would be a wonderful way to dress them up a bit!

I'm stunned by the color of this dish - so beautiful and vibrant!

oh how wonderfully warm and sweet. i've been in the mood for just this lately! is it cold in CA? seems like it by the way you've been cooking :) thanks for sharing this - the citrus is the perfect marriage for this dish!

i LOVE sweet potatoes/yams! i will try them this way...it sounds really great!

You can't go wrong with pecans, citrus and sweet potatoes..

Thanks for solving the age old debate of what's a yam, and what's a sweet potato. And the recipe sounds excellent - a good example of Yankee ingenuity!

Lydia-
Whatever they are, they're wonderful! Thanks!

Jeff-
Glad to hear it!

Gilly-
I know, just roasted with nothing on them, and I still love 'em.

Patricia-
Ooh, thanks so much! Glad it made you smile.:)

Linda-
"Cold"? Well...It's about 67 right now but overcast and windy. So I'm feeling pretty chilly. But I heard Buffalo has had 8 ft. of snow and is excpecting 2 more, so I'll shut up now.

Melody-
You are so right!

I'm a total sweet potato addict - I can't get enough of them, especially the "red garnet" variety. And I love citrus and sweet potatoes so this recipe is right up my alley! Thanks for sharing =)

Oh I am laughing - relieved I am not the only one who has had "experiences" moving away from New England. I can't wait to hear about other encounters!

lis-
Red garnets are the kind I buy! I love them too.

Chris-
Thanks for coming by. I have plenty of "experiences" to share.... :b

I just made crispy tofu stix with sweet potatoes the other night. They do go well together.

Oh yummy yams you've cooked here:)
I've always wondered if yams belonged to the same family as sweet potatoes, thanks for highlighting this!

One of our favorite sweet potato rendition is mashed sweet potatoes with chipotle, a recipe from Alton Brown. It's so delicious and yours looks great, I love the addition of pecans.

Hey FoodBlogga - My office serves free lunch and recently, they have been serving up a lot of this yam...exactly like the one you made...I was confused like you too, because I always think of yam as the white color variety...thanks for explaining. :)

Very yummy--I just fixed a sweet potato souffle that even my veggie-phobic husband will eat. I love yams/sweet potatoes/whatever you want to call them.

I had something like this on Thanksgiving and it was my absoloute favorite part of the meal. The yams were pureed and baked with sugared pecans on top. I bet this is just as good. I'll have to try it!

Susan, before I read your post, I thought yam and sweet potato were different too!

I love sweet potatoes/yams too and until I read your post have always thought they were different.

I wonder how much collective time in the world has been wasted by people like me looking for one of these when we could only find the other? It's probably a lot of time. Oh well...

Urban Vegan-
I'll trade you some sweet potatoes for some tofu stix. :)

Ari-
Thanks! Mmm, the heat from the chipotle must contrast nicely with the sweet yams.

Natalia-
Thanksgiving is the ultimate food day! Thanks, hope you like it!

Anali-
Since that first sweet potato pie, I've been hooked!

Those pictures are so vibrant and full of color! Very well done!

Kristen-
Thanks so much!

I hate to go against the info of a farmer, but I lived in West Africa for a couple of years, and there really is a difference between yams and sweet potatoes...it's just that we don't have true yams in America. Here we have used the terms "yam" and "sweet potato" interchangeably for the same thing.
A real yam has a white flesh and is a lot like a potato but except a little more dense (not a real good description)...I know that I can't prove that I know what I'm talking about, but I just stumbled upon your blog and thought I'd share what I knew...

Just found your blog the other day – beautiful.

I'm gonna have to agree with Sandi - sweet potatoes and yams are two different plants, but the names “sweet potato” and “yam” are used interchangeably in the US for the sweet, orange-fleshed tuberous root you used in your recipe. What you're using is really a sweet potato. (Sorry, I work with plants and am a nerd like that.)

What is the difference between a sweet potato and a yam.