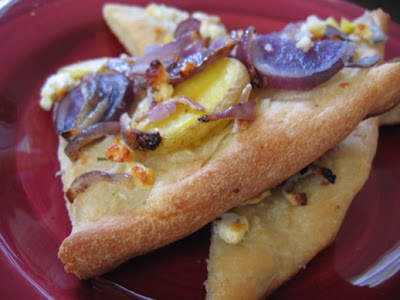 Like most Italian families, my mom did the cooking, my dad did the eating. There were however certain culinary “events” that my dad performed with gusto such as pickling, canning, and making homemade pasta. For a period in the mid-90’s, he started making pizzas, really good pizzas. One Sunday, most likely during a Patriots game, he came up with the idea for potato pizza. It was a hit then and continues to score touchdowns with everyone who eats it.

By the way, the Patriots beat San Diego today. I have mixed emotions. Growing up in Rhode Island, it was mandatory to root for the Patriots. Plus my Dad would’ve grounded me if I didn’t. Yet, Jeff and I have become Chargers’ fans and would have liked to see them win today. Actually, we’re already over it. This seems to be the way things are here in Southern California; when a professional sports team loses, it’s like, “So, you wanna go to the beach now?” Not so in New England. Take when the Red Sox lost to the Mets in ’86 for example. Jeff's family barely spoke for a week; there were no words for their grief. So, it’s probably a good thing that the Patriots won.

Having gotten completely frustrated with San Diego’s abysmal performance today, Jeff and I took a walk after the game. When we returned home, the answering machine was flashing “1 new message.” We hit play and heard my dad's voice: “What’s the matter Doc, you taking some aspirin for your headache after that great New England win over your unbeatable Chargers?” Did I also mention that New England fans rarely gloat?

Since Dad was on my mind today, I thought I’d make his potato pizza (the next best thing to watching the game with him). I used blue and white potatoes because I think it makes the pizza more visually appealing. Of course, I just realized that blue and white are the Patriots’ colors. Hmmm, maybe I subconsciously wanted them to win after all.

Wash potatoes and pat dry. Microwave the whole potatoes for 2-3 minutes until soft enough to handle but firm enough to cut so they won’t crumble. Cut into ¼ inch-thick slices.

Heat half the olive oil in a skillet over medium heat; add shallots; cook 4-5 minutes until slightly browned.

Preheat oven (see temps below). Roll out dough on a lightly floured surface. Transfer to a sheet of parchment paper (if using a stone) or to a parchment lined baking sheet. Brush dough lightly with remaining olive oil. Place a thin layer of shredded mozzarella on the dough, then arrange potato slices on top. Season well with salt and pepper. Add crumbled gorgonzola or blue cheese, and lightly press it down with your hands.

For a pizza stone, bake at 500 degree for about 10 minutes, or until both the top and bottom of the crust is brown and the cheese is melted.

For a baking sheet, bake at 450 for about 20 minutes, or until both the top and bottom of the crust is brown and the cheese is melted. Let it cool for a couple of minutes before slicing.

TIP: Boiling the potatoes makes them too moist which leads to a soggy crust. Ugh. Microwaving or baking them are better bets. Also, adding the fresh rosemary after removing the pizza from the oven helps to maintain its color and flavor.

Save This Page on Del.icio.us
Posted by Susan from Food Blogga at 7:56 PM

Sounds delicious. Nothing beats homemade pizza! And I have to say. I LOVE potatoes on pizza!

So do I. I would love to see what you would do with potato pizza sometime. Thanks so much.

What a unique pizza! My husband would totally love this. Thanks for sharing the recipe!

Thanks. My husband definitely loves this pizza (and the Patriots).

I love potatoes and rosemary on pizza. It's a wonderful flavor combination!

Especially when the rosemary is freshly picked and fragrant.

I've recently decided that I should work on learning to make a decent pizza and this sounds fabulous. I'll have to give it a try on my next pizza making session.

And I have to say, the Patriots? Way cooler than the Chargers.

Fantastic! I hope you like it.
And at least Tom Brady is cute, so that's a consolation.

I have no opinion on football (yes, strange for a Texan, I know) but this potato pizza sounds delish. I've had potato slices from Sullivan Street bakery, but never tried making it myself. And as I'd already decided today was going to be a pizza-making day, I know what will grace the top of one of my pies!

Wonderful! I love pizza making days too. Hope it's delicious.

I loved this write up about the Pats game! We do take sports way too seriously out here...though I do hope you two will be rooting on the Pats tomorrow against the "Doltz"!

I laughed as I read your post, because it works that way with my fiance. I cook; he makes the pizza! That said, I love potato pizza. I've had it as "mashed potatoe pizza" in a local pizza joint, with red sauce and lots of garlic. Oh yum.

Are those purple peruvian potatoes I see? I actually love them... mostly because of the name, and because purple peruvian peppers are also available at my local market, and I mean, come on, with a name like that you've got to smile!

This recipe looks delicious. I really like your taste in food! Simple, healthy and delicious.

I started eating potatoes on pizza after moving to Sicily and I must say it's one of my favorite pizza toppings now! The rosemary is a must...it's a wonderful combination!

Jeff-
Thanks! Of course I'll be rooting for the Pats today (what if my dad read this blog and saw otherwise?)"Doltz" ha-ha.

Rachael-
I made a special effort at the farmers' market this morning to talk to Neil our local potato expert/farmer. He said the ones I used are "All-Blue" potatoes which are slighly starchier, but the same color as the purple Peruvians. Apparently, both get their color from iron. The purple Peruvians are technically fingerling potatoes which are longer and slimmer than regular ones.
I actually have a picture for you, but I don't know how to put it in the comment section! Does anyone know how to do that?
Thanks for the compliments.

Nicole-
Have you noticed a Sicilian way of making potato pizza?

I often use cooked potatoes in my pizza dough... I love what it does for the texture and aroma.

During this economic turn down I started making pizza for our family. Now we can't eat pizza out.