I (heart) Turkey: A Turkey, Proscuitto, and Gorgonzola Sandwich 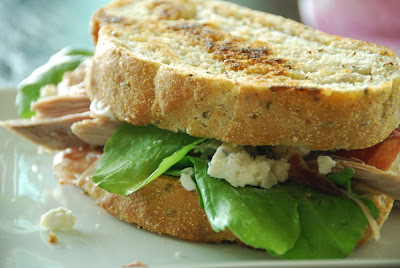 I made a turkey for New Year's Day. Yes, I realize New Year's is not a turkey holiday, and the next major food holiday isn't until Valentine's Day (which I don't think features turkey); I cooked a turkey just because Jeff had a hankering for this sandwich. It's that good.

We had a lot of leftover turkey after Thanksgiving, and in an attempt to make something that did not include cranberries or gravy, I made this sandwich. Jeff took it for lunch one day, and actually called me to tell me how delicious it was (and to ask me to buy another turkey at Costco).

You may think me silly for cooking an entire turkey just to make sandwiches, but after you taste this combination you'll be running to Costco too. With crispy prosciutto, tangy gorgonzola (Italian blue cheese), zesty arugula, and crunchy toasted rye bread, this is a gourmet sandwich that takes only minutes to make. Served with a cup of vegetable soup or a side salad, it makes a satisfying and simple dinner as well.

Since we're talking about sandwiches, I'll leave exact measurements up to you. You could also try this with leftover baked ham. 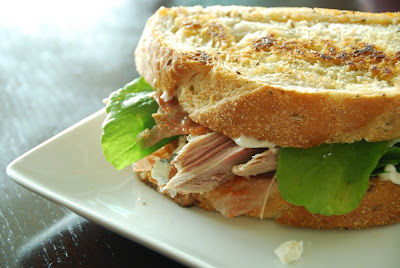 Turkey and Proscuitto Sandwich with Gorgonzola and Arugula
Print recipe only here.

Here's what I did:

Cut thick slices of rye bread, drizzle with olive oil, and place under the broiler for 5-6 minutes, or until golden brown.

Meanwhile, heat turkey in a skillet on the stove top for several minutes, until warmed through. Place proscuitto slices in a hot skillet for about 1 minute until slightly crispy.

Spread some mayonnaise on the toast, top with some crumbled gorgonzola, add a few leaves of fresh arugula or wild dandelion greens, then the warmed meat and prosciutto. Eat immediately.

Jeff suggests having it with a cold lager.

Save This Page on Del.icio.us
Posted by Susan from Food Blogga at 6:23 AM

Susan, you know what put your sandwich over the top?

And you had me at gorgonzola! :)
By the by, my computer won't let me vote (spoilsport). Can you add a vote for Michelle's Swedish wafers for me please!

Not tired of Turkey yet?:D

Looks great, love Arugula in the sammies.Happy new year to you, enjoy.

We've been eating turkey and brie (I have a lot left of a wheel) on rye with what's left of the mince filling spread on the bread. Not bad.

Turkey isn't very popular here, I've only ever had it as a deli meat. That sandwich looks seriously good, but I would still have some sort of sweetness on it, from cranberries or honey mustard, because I have a sugar addiction.

Maybe you should roast a Valentine's turkey just to mess with everyone's heads. Happy new year!

I've no idea why people complain so much about leftover turkey - the sandwiches afterwards are always the best bit. My husband claims to have invented the best turkey sandwich this christmas (turkey, mayo and mild mustard pickle) but yours sounds even better. Not that I'm going to tell him that...

Kudos to you for cooking a turkey because you fancied turkey, not just because it's christmas!

Oh, my god, Susan. This sounds amazing. And we too think that turkey deserves more than one day a year. We usually roast a few of them each year. Another take on your glorious sandwich would be to use a crusty sourdough bread and some brie in place of the gorgonzola.

aah, wish I was a non-vegetarian:) the sandwich looks good! we generally go and eat the mediterranean s/w at panera Bread for such cravings..I love their tomato-basil bread:)

I loooove sandwiches made with leftover turkey -- and this one looks particularly fabulous!

That is one seriously classy sandwich!!!

You had me at "prosciutto". Gosh I love sweet/salty on sandwiches!! This looks fabulous...

gorgonzola is my tip top favorite cheese. that looks wonderful!

Looks wonderful! Nice combination. I will have to try it because I am really a fan of the warm sandwich.

We had turkey at Thanksgiving in Seattle then left = no sandwiches.
Christmas steak at the neighbors = no turkey.
I'm thinking I need a turkey!
Your sandwich looks outstanding Susan and is going to cause me to roast a turkey just for the two of us.

I'm one of those people who's generally pretty ho-hum about turkey, but this sandwich looks truly delicious to me.

I completely understand cooking a turkey just for the sandwiches, I'm roasting a chicken tomorrow for that very reason!

Hi Susan, you got me at gorgonzola.

Jeff is lucky to have to to run to Costco :-)

Sounds delicious to me. I had similar plans for the coming weekend (I decided to put an end to getting cold cuts at the deli--after all, roasting a turkey breast and slicing it myself will be cheaper and tastier. Didn't quite appreciate how much better things could be until the Thanksgiving sandwiches ran out...). This sounds like a really tasty sandwich to try.

Compliments on the New Year to you !!

You are an amazingly talented cook and what a lovely blog you have...!!!

Do stop by my blog whenever you find time...

I don't think you're crazy to cook a turkey for sandwiches. To me, that's the best way to eat turkey. Hmmm ... I haven't had turkey since Thanksgiving. Sounds like a good idea!

toasted rye, mayo, arugula... oh boy oh boy! I wanted to marry you if I was a man :D

I think it's perfectly reasonable to buy a turkey for sandwiches...it's the best part, after all. Well, except for the soup, but you can do that, too. (I've bought turkeys to make soup)

Susan, your sandwich is making me hungry - and I had lunch a little while ago! My hubby loves sandwiches, I'm sure he'll love that combo.

Sandwiches are surviving! And an endless world of imagination/creation!

Here we generally cook turkey for the New Year's in Turkey :D

And your sanwich looks so mouth-watering! My list is getting longer, n longer! :)))))

Looks lovely, even to someone who doesn't eat pork. Turkey and avocado is also one of my favorite sandwiches. And sure, I'd make a whole turkey just for sandwich fixings!

Your sandwich looks delicious... I have never tried yet Gorgonzola cheese... so many new things to try!!

Have a great day, Margot

I totally agree with cooking a turkey just for sandwiches. Isn't that the best part of the turkey dinner anyway? The leftovers? Why not go straight to it?
That bread looks so good!

Manggy-OK, a few cranberries are alright. ;)

Sophie-Yeah, probably best not to tell him. Thanks for the kind words.:)

Rachael-The saltiness of it is splendid, isn't it?

Sagari-I love the crispy bread too.

Katy-It's especially great with the prosciutto too.

Sharona May-This is a sandwich to get excited over.

Tanna-It's just the two of us as well. But you'll find ways to eat it all up! ;)

Mike-You're right. It is less expensive and healthier.

Swati-Thanks for stopping by and for your kind words.

katiez-Soups--that should be my reason for my next turkey!

Suzana-I hope he likes it.

Bal-Yeh! I'm so happy to see others don't think it's weird either. ;)

Lydia-Turkey and avocado are great together.

Margot-It adds some complexity of flavor--hope you give it a try.

You also solved my dinner dilemma.

I was just over at another blog and there too I was drooling over a sandwich. Your's has got me really hungry now. I love the idea of gorgonzola - just perfect!

Silly or not, it's one great-looking sandwich! I'm not sure that I'd drive to Costco or anyplace else to buy a turkey just for future sandwiches, but I'm filing this one away for the next turkey I happen to roast.

Guess what we're having tonight? Ham! Ok, so it's not turkey, but like you said, it will make a great sandwich. I think adding Prosciutto to my ham sandwich might make it a bit too "porky". Maybe I'll add some bacon to it. Hee hee.

Don't feel silly about buying a turkey to make sandwiches. I buy turkey breasts all of the time just for sammies. Homemade turkey is so much tastier and better for you than the salty gross processed stuff.

Meeta-Sometimes a good sandwich is all you need.

Love all ingredients there! A great turkey leftover idea!

Did anyone see Martha on Friday? She made a leftover Turkey Cobb sandwich on a toasted brioche bun with crispy bacon, guacamole and blue cheese spread, sliced tomatoes and, an oh-so-glorious, fried egg! I, funny enough, had leftover ham last night. Made this sandwich with the ham, gouda, avocado spread, and the fried egg--I might have actually jumped for joy it was so good. Enjoy!