I don't think there is a cheese that my father doesn't like. He once received a pungent, powerfully-smelly Italian cheese from a friend; he described it as: "Good. Very tasty. With the smell though, you could never serve it for company, but if it's just for close family, yeah, it's good."

It certainly didn't stop him, or my family, from eating it.

At my house we ate a lot of cheese -- as a appetizer, on dishes, after dinner, or just for a snack. Unlike Reggiano-Parmesan and Grana Padano, brie was not a staple cheese growing up, but it's a staple in our refrigerator now.

In fact, there is currently a wheel of brie made from goat's milk in my refrigerator courtesy of Steve at Ile de France, (he has no idea how happy he has made Jeff). It has a remarkably silky texture and pleasingly tart flavor.

Though most typically served as an appetizer with crackers and cured meats, or baked into a puff pastry, brie is quite versatile. It enlivens paninis, enriches pastas, and makes delectable crostini and quesadillas. For a rustic dessert, pair it with nuts and fresh fruit such as grapes, figs, dates, and pears. 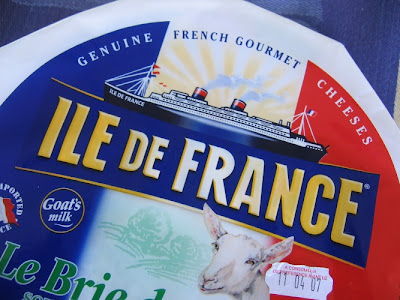 Although brie is a French culinary specialty, it is popular outside of France, and available at most supermarkets here in the States. 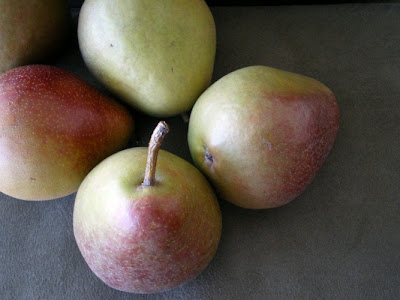 I used brie to make a seasonal salad of spicy watercress, sweet Seckel pears, and chewy Medjool dates. Seckel pears are the tiniest of all pears and one of the tastiest -- so sweet that they have been called, "sugar pears." As you can see, they are short and rotund with dark green skin that often has a bloom of burgundy. If you are fortunate enough to have them in your market, then try them.


Saute shallots in 1 tsp olive oil, for 3-5 minutes until softened. Remove from heat and set aside.

For the dressing, whisk all of the ingredients in a small bowl and set aside.

To make individual salads, start by placing some watercress in the center of a plate, then add pear slices, some brie, and some dates. Top with toasted pecans and drizzle with dressing. Repeat with remaining three dishes.

P.S. I just found a delicious salad of Roasted Golden Beets and Brie over at Aria's Passionate Nonchalance.

Save This Page on Del.icio.us
Posted by Susan from Food Blogga at 7:00 AM

LOL! You dad sounds like fun loving guy!
My daughter loves Cheese too. Salad looks delicious.Pears and Brie combo, good one to try!:

I noticed those pears the other day and I have to admit, I didn't know anything about them...silly because I love pears and feel pride in knowing when to use a bosc or a bartlett in a recipe. Thanks for writing about these!
Julie

I like this recipe a lot.
Very nice combination...

I would be very unhappy if I couldn't eat cheese anymore...like your father I'd eat any cheese. This starter looks wonderful, great to serve at dinner parties.

Your salad looks gorgeous. I haven't tasted too much cheese - mostly the usual Cheddar, Mozz., Parmesan and feta, so I can't say much. My Dad treated a Dutch missionary for illness once. When he refused payment, the missionary insisted so my dad said get me some cheese from Holland, and that man did! Should find out what kind it was!

Cheese and pears are so good together. We have a somewhat local blue cheese here called Great Hill Blue, made in Marion, Mass., and it has a real affinity for pears from our local orchards.

You have stolen my heart with this post and this recipe!!! It's pumping like mad just looking at the photos. Sweet pears and brie -- the BEST things on Earth!!!

Brie is something I NEVER ate growing up, but once I got into my 20s (and my friends and I got out of college) it started showing up everywhere. I LOVE it.

And I have an affinity for salads with unexpected ingredients, too, so this is right up my alley.

AND ... if you have a moment, will you tell me a bit about your print-only pages?! I've been looking for a gizmo like this for almost a year now, but with my limited html skills it just ain't been happenin'.

That is a beautiful salad!

Julie-You're welcome! Now, go back and buy some. :)

Coffee and Vanilla-I'm pleased to hear it.

Linda-I agree since it makes a lovely presentation.

Sra-Ha! My dad would love to have that man as a client too!

Lydia-Blue cheese and pears is a lovely combination.

Abby-Then, you'll be in heaven with this salad.

I think this sounds fabulous. I love brie, and I'm always interested in finding a way to eat it that doesn't involve white bread. I've never had this type of pears, but I'm imagining the flavors of pears, brie, and dates and I'm positive it's a total winner!

Lovely! I eat brie more often now, and you have inspired me to use it in another delicious way!

your salad looks so elegant! I imagine it serves at a cosy cafe of a promenade, viewing the gorgeous Mediterrean Sea!
And I love seckel pears too, they make any dish look better, and taste sweeter :)

That salad has such a gorgeous composition, with the soft colors. I can't stop looking at it.

Hi Susan,
Your salad inspired me to make this one from the ingredients I had already at home:

oh susan those little pears are too much! oh how i need to have brie and pears now, sounds and looks incredible. it looks like we were on the same page in our salads last week :):) love brie too, some day i want to master baked brie we should both try it.....hint hint...

i added your delicious link too (smiles)

I love dates with strong cheese: Brie, Chevre.... add in the pecans and pears...perfect!

You will win over my wife with anything having Brie in it.

Your father sounds hilarious! A cheese just for close family! I love it! ; )

Such a beautiful salad - no one will be able to resist that! I haven't had watercress for a while, thanks for the reminder.

The essence of simple and good taste! We just had some wonderful pears but I'm now going to look for these sugar pears. I have the Brie.
Excellent Susan.

What a delicious looking salad! I love Brie and apple - never even thought of pairing it with pear! :)

Totally agree on with your brie conclusion. Cooking for my extended family recently, I suggested mushrooms stuffed with blue cheese. This met with a wrinkling of noses. As did goats' cheese and taleggio. Brie was the winner!

Kalyn-Thanks! I hope you find them too, but if not, other pears work well. The flavors really are beautiful together.

Gattina-Ooh, I wish I was eating it at that beautiful place too. :)

Nupur-That is really kind of you to say.

Margot-I'm so pleased to hear it. I'll be checking yours out today!

Aria- Thanks! I appreciate that! :) I haven't mastered baked brie, but I'll let you know if I do.

Katiez-I do too; the contrast of the tangy with the sweet is irresistible.

Tim-Maybe you should surprise her with it!

Valentina-It is chock-full of goodness!

Nora-I forget about watercress too! It's surprisingly good with pears; the sharpness of the watercress contrasts so well with the sweetness of the pears.

Tanna-I hope you find them!

Chris-The pears are really delightful with the brie, and with the toasty pecans don't hurt either. ;)

Wendy-It does seem to be a crowd pleaser, doesn't it?

I love recipes like this- they remind me that even though it's Autumn, we can still eat beautiful salads. Yes!

Love watercress! When we were little we used to pick them from the creek near our home!

My dad loves a good stinky aged Provolone or Pecorino Romano; no wimpy Parmesan for him.

Wonderful-looking salad. The combo of brie and pears is such a classic.

I also adore melted brie... particularly in the summer tossed with ripe tomatoes, fresh basil, garlic and olive oil and then mixed into hot pasta (old Silver Palate recipe)... try it out on your Dad sometime and watch him swoon. :-)

I love brie on crackers with pineapple...strange combination but I LOVE it...give it a try sometimes if you come across good pineapples.

This looks exceptional! I love the flavours. So simple and refined!

I love simply dressed salads, though I also enjoy over the top ones as main courses. Perhaps I would have added some walnuts to it as well to give some different texture when eating it.

Everything I love is here in this salad, Susan - I want my plate full, please. ;)

A great entry! I love the dates you added with the brie and it looks so fresh and healthy...
Ronell

Bazu-That's a nice way to put it.

Cris-That must have been fabulous!

Karen-Our dads would hit it off!

Bradley-There are pecans in it, but walnuts would go as well.

I made your salad again, this time replacing very little, it was perfect ! I will make it again with dates (I had to replace them with raisins).

Now this looks luscious -- crisp, sweet, rich and tasty. Thanks for the idea!!

Those seckel pears sound dee-lish! I just put them on my grocery list. I'm hoping a place like Whole Foods will have them because I've never seen them before. And your pictures are just beautiful.

This not only sounds delicious, it looks beautiful too!