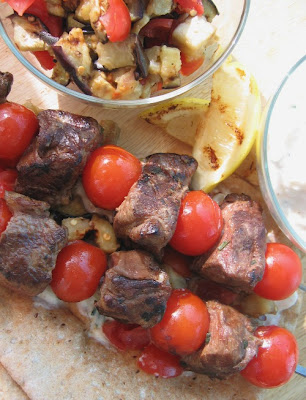 When Jeff watches t.v., it’s typically one of three types of shows: sports (he’s a guy), nature/science programs (he’s a doctor), and cooking competitions (I’m stumped). He’s not so much into instructional cooking shows, though he doesn’t mind Giada’s Everyday Italian (he’s a guy). What he really likes are the cooking competitions, like Top Chef and Iron Chef America.

One night last summer, we saw a particularly inspiring episode of Iron Chef featuring Bobby Flay, Jeff’s second favorite chef after Cat Cora (he’s a guy; Jeff, not Cat, that is). We like Bobby’s creativity and the way he makes ordinary grilled food seem chic.

So the following day when I went to the library, I checked out a couple of his books, including Grilling for Life and Boy Gets Grill. They were mixed in among a 4-foot high pile of cookbooks (including many baking ones) that caught Jeff’s eye when he came home.

Picking through the pile like he was looking for the perfect apple among many bruised ones, he paused upon seeing Bobby’s books. “Hon, why do you have two Bobby Flay grilling cookbooks?” he asked.

“Because he’s the guy you really like on Iron Chef, so I thought I’d check out some of his recipes,” I replied.

“So, are you planning on just reading them or actually making something from them?” he asked.

“Making something. Why else would I have gotten them?” I said. (Though we both instantly realized the flaw in that argument—for the next three weeks, the closest thing those baking books would come in contact with is dust.)

“But hon, we don’t have a grill,” he said delicately.

For the last three years, we lived in a WWII era home with many charming traits, including honey-colored hard woods and a fragrant lemon tree outside of our bedroom window. However, since these homes were built about 8 inches apart from one another, grills were not allowed.

We’re in a new place now that was recently constructed, so we have not one but two grills. As a result, Bobby and I have become pretty tight.

So when I received an email a couple of weeks ago from Rachelle of the American Lamb Board, offering me some lamb, I didn’t hesitate to accept or to consult Bobby. When I asked Jeff if he would prefer Bobby’s lamb sandwich with a sage aioli and sun-dried tomato tapenade or lamb kebabs with a minted yogurt chutney and tomato-eggplant jam, his answer was “yes.” I made both. 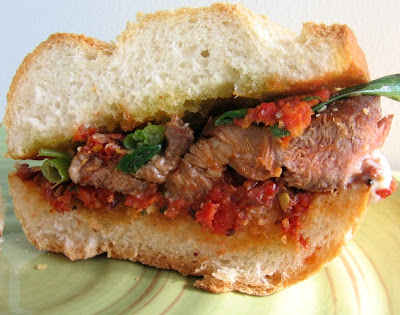 My experience was wonderful. As Rachelle promised, the package of lamb from Superior Farms arrived on time; it contained an 8-9 pound piece of lamb, 4 skewers, a meat thermometer, some dried rosemary and Turkish oregano from Penzey’s, and some recipes from the Board.

Lamb is a versatile meat that can be cooked in various ways with various seasonings. To make the most succulent lamb possible, marinate it overnight in olive oil and fresh herbs; this helps tenderize the meat and infuse it with flavor. Also cook it on a thoroughly preheated grill until medium-rare to prevent it from becoming tough. The result: charred on the outside, buttery on the inside. In fact, when Jeff finished his sandwich, he said, “This is palpably better than store-bought lamb. You better find out how much this costs to ship, cause we gotta get this again.”

This recipe for Grilled Lamb Sandwiches with Sage Aioli and Sun-Dried Tomato Tapenade is from Hot Off the Grill with Bobby Flay on The Food Network. I made minor changes such as adding arugula leaves for extra spice and color and substituting fresh herbs for capers in the tapenade. Since everything in this recipe can be made the day ahead, it’s a great weeknight meal when you’re short on time. 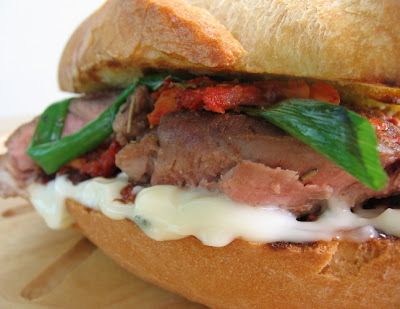 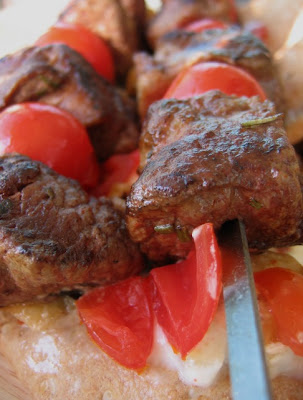 To cook meat, preheat grill. Remove the lamb from the marinade, and season with salt and pepper. Alternate 4 pieces of lamb and four cherry tomatoes per skewer. Grill for 4-6 minutes, turning as needed, for medium-rare.
Serve cooked kebabs with chutney, jam, and pita breads.
You might also like:
Sausage and Broccoli Rabe Sandwich
(Giant) Grilled Lobster
Fritatta (Fri-taaa-ta) Sandwich

Save This Page on Del.icio.us
Posted by Susan from Food Blogga at 7:00 AM

Jeff sounds like a fun "guy".
Both of these look terrific - Bobby does know his grill. I may have to try that tomato-eggplant jam.

Both these recipes look great! I just love lamb.

Okay, you've convinced me! I became so disenchanted with the food network on my last trip to the states that I was avoiding all of the 'stars'. Bobby's book(s) have been add to my Amazon list. Both recipes sound fantastic...and we have 3 grills and a smoker!

Jeff is a doctor too,so is my hubby!(Internist):))
Jeff watches food competitions bcos docs are nerds and they like a challenge!!Hahaha!! Giada, of course, you know why?!:P
Arvind mostly watches animal planet or TLC and sleeps in a second on the sofa until 10pm and then goes to bed after a tiring ,long day!!:D
Both looks yum, specially Bobby Flays.Eggplant jam is interesting!

My husband is the same, but only started watching the food competitions and Top Chef after he met me. I recently made my first Bobby Flay recipe and it was a total hit!! Just a sauce, but an amazing sauce. This recipe really looks like a winner!

I used to drive hours to get a decent lamb kebab in a Persian restaurants until the hubby and I finally discovered a recipe that worked for us. Lamb (as well as duck) are two meats that makes my heart flutter. I always get Australian lamb but I guess it's time to give American Lamb another try. Your lamb dishes are making me hungry right now - and I just had lunch!

I just blogged about what a failure one of Giada's recipe was! Bobby's looks better. I haven't eaten a ton of lamb in my day, but these look delicious.

Haven't had breakfast yet but you're making me crave kebabs! These recipes look delish! I love the tapenade, sage aioli, lamb combo.

How can I be reading this after lunch and suddenly be ravenous? Lamb is one of my favorite foods, Susan, and these recipes look and sound amazing.

Also sounds like you and Jeff are a great team. very cool.

Nobody calls me ever to offer me lamb. What's up with that??

I'd probably pass up the lamb if someone offered me the cucumber mint chutney -- delicious!

Kalyn- Hope you try them!

Katiez-I don't really watch it, but the recipes are available online, and I like looking through the books too. Hope you give Bobby a try!

Asha-Really? Good thing is I fall asleep early too. ;)
The eggplant jam was fabulous!

Kelly-They were a hit with everybody.

Amy-Maybe you should wait for lunch for the kebabs! ;)

Suburbangourmet-That's because you're a guy. ;)

Terry-That is sweet of you to say.

Lydia-I was eating that by the spoonful too!

I can't keep my eyes off these photos. OMG, lamb is my fav, and your recipes are soooooooooooooooo delicious!

Oh those kebabs look perfect! I've tried tomato jam but not a tomato eggplant one. I'm curious what it tastes like.

LOL! I love your husbands response to the question ;) Pity we've done our meat shopping for the month, but next month I'll make sure to get some lamb on the list :D

Susan, both your dishes look so good! João would be drooling over the keyboard if he saw this.
I've had (and cooked) lamb just once and he loved it; keeps asking me to make it again.

Oh. My. Goodness! They all look good, but the sandwich especially! This is all reminding me that I brought no lunch with me today. :( I want lamb!

We recently bought a big gas grill for our patio and I'm looking forward to getting it set up to use. I've never made lamb, but those recipes look so great I might have to venture out of my comfort zone!

hehhehe...does jeff read your blog ? :)) lamb kebabs look awesome and so tempting...but I thought u re a vegetarian...!

You take great pictures. What kind of camera do you use? Any tips on taking good food pictures?

Both the dishes look so yummy! That eggplant -tomato jam sounds very tempting... lamb is my favorite meat, so always looking for new recipes.... thanks Susan... and Bobby too...:)

I eat lamb only rarely, but the kebobs look so good that I'm thinking it's about time for another round. And the tomato-eggplant "jam" sounds fabulous! Now THAT, I would serve with lots of different dishes.

These recipes look awesome--I just love lamb, especially with bold Mediterranean flavors. Of course, being an apartment dweller, I would have to broil the meat, which isn't nearly as much fun as grilling.

Anh- Thanks sooooooo much. :)

Jyothsna- The creamy eggplant adds a slight smoky, earthy quality that is lovely with the tomatoes. I couldn't stop eating it.

Ellie-Well, put it on the list for next month!

Skat-I wish I could make you one.

Aria-He's got some great recipes.

Nicole-Many thanks! I use a Canon Power Shot A95 (when my husband's not using it to take pictures of rashes--it's his and he's a dermatologist). :) Actually, I don't have any training, but I'd suggest using natural light as much as possible, simple set ups, plain plates, etc. to start, and taking lots of pics. Lots. The more you take, the more you learn. At least it's true for me. Hope this helps!

I love eating lamb. It's just that I don't cook it as often as other types of meat. These are great recipes, by the way.

Yummm. I am totally drooling here!

Such scrumptious food! That sandwich is very attractive!

Susan, you got me at "charred on the outside, buttery on the inside". I want some! That grilled sandwich looks sooooo good.

I have never cooked lamb and I have no reason why. Everything looks delish! I've got to start cooking lamb!

P.S. Would love to meet up for a saturday morning breakfast. How about it?

Gosh! I love kebabs!!! And tomato-eggplant jam??? Never tasted it but it sure sounds awesome!!!

Your photography is excellent! Yummy recipes :-)

Susan, that sandwich looks incredible. I have to admit I find Bobby Flay's food quite appealing, and it looks like you cooked a quality piece of lamb perfectly. I also love your substitution of arugula and fresh herbs -- I think it makes these sandwiches just perfect for summer.

Jeff and Nick sound as if they would get on just fine. So if we ever get to meet up, they can amuse themselves while you and I go to the farmer's market and then move on to cocktails ;-)

Both of these recipes sound amazing, particularly the sandwich. I adore lamb and every time I eat it I wonder why we don't have it more often. We had some thick lamb chops on the BBQ recently that were just so succulent and wonderful; and before that a friend made some marinated pork and lamb kebabs that melted in your mouth.

Pablopabla-I know what you mean.

Chris-I think you're pretty fab too. :)

Rob-Now, I really know Jeff and I are in good company if you like Bobby too. :)

Jeanne-I know what you mean. Jeff enjoyed them both, but he really loved biting into that hefty sandwich.

My mom and I love lamb ! I'm going to make this for her on Friday. The Tomato Tapenade sounds amazing!

Oh, wonderful! Hope you and your mom have a lovely dinner.